Playing Games and The Rule of St. Benedict 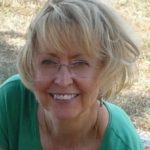 Jane Tomaine is Abbess of the Feline Cloister. An Episcopal priest and retreat leader, she is also author of two books on The Rule of St. Benedict.

Do playing games and The Rule of St. Benedict seem miles apart?  On first glance it might seem so.  St. Benedict was serious about the search for God and salvation.  And the times were uncertain and harsh.  Yet Benedict was understanding and compassionate.  Might he have allowed some recreation between the prayers an work?  Were there even games that were played?  Certainly the monastics played games a children.

What was your favorite game as a child?  Was it leap frog, jacks, tag, dodge ball, soft ball?  Perhaps your favorite was hide and seek, musical chairs or computer games.   My favorite game was one that my brother and I and some other neighborhood kids invented.  It was called “Hide from Cars.” 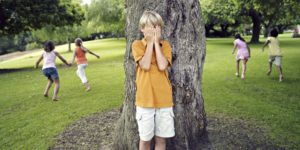 The “game” went like this—When it was completely dark outside we would all stand in the middle of the main street which ran through our residential neighborhood. It was a pretty busy street.  (Yikes!  I wonder what my parents would have said if they had any inkling at all what we were doing?)  As a car approached we would stand there as long as we dared.  When terror set in we’d dart off the street as quickly as possible…zip…diving into the bushes alongside the road.  Each “player” had to be totally concealed in the bushes before the headlights of the car passed in front.  I don’t remember what the consequences were if the headlights passed before you were concealed let alone what the real consequences might have been if one of us didn’t fly off the street in a timely fashion!

The Goal of Most Games

Many of the games we played as children have common characteristics.  Someone hides and someone seeks.  One person throws a ball (very hard) and another person “dodges” the ball or gets a painful thump.  The tagger pursues.  The “taggee” flees.  One person jumps over another to get ahead.  Another player shoves someone out of the way to get a seat before the music stops.  With all these self-serving game goals it’s no wonder that The Rule of St. Benedict doesn’t endorse games.  Playing games and The Rule of St. Benedict seem miles apart.  Why is this?

Why Most Games are UnBenedictine

So many games are based on pursuit or being “the winner.”  Maybe that’s why I liked “Hide from Cars.”  It was a game we played together but no one ever won or lost.  There are no games that I can think of where the object is to be found.  There are no games where the object is to help the other person be the winner.  From the time we’re young children we are schooled, trained and played into the joys of pursuit and winning.  We are honed to the desirability of separation and competition.  “It’s just play,” the skeptic to this view chimes.  Ah, it is not just play.  Truth is, we learn better when we play at something.  While having a good time we absorb intended lessons. 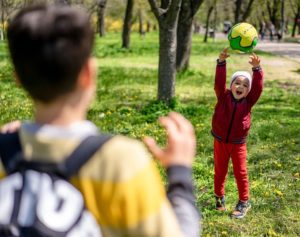 One game that I can think of that doesn’t use the principles of pursuit and evasion or separation and competition is the simple game of catch.  Unless you’re playing with a trickster or a downright mean kid, the object is to throw the ball to someone else so that they can actually catch it and throw it back to you.  Now isn’t this a satisfying game?  When I throw a ball to someone or catch that ball, a positive connection is made between me and the other person.  A unity is created.  We are no longer two, or three or four, or however many we are.  We’ve become one, connected by the ball as it is tossed from one person to another.  We have a common goal—not letting the ball touch the ground.

Instead of pursuit and evasion there is mutuality and connection.

Instead of separation and competition, there is unity and a common goal.

Playing Catch – A Game Based On The Rule of St. Benedict

What does the game of catch have to do with the Rule of St. Benedict? The game of “catch” is a great illustration of relationship and community as they are presented in the Rule.  Let’s take a look.

As a quick review, Benedictine obedience is listening and responding.  We listen to others and even to our lives in order to discern who God is calling us to be or what God is calling us to do.  Then we do it!  In Chapter 72 – Mutual Obedience Benedict says that obedience is “a blessing to be shown by all, not only to the abbot or prioress/abbess but also to one another.”  RB 71.1.  Benedict then gives us the reason for mutual obedience – “…we know that it is by this way of obedience that we go to God.” RB 71.2  How true!  Ignoring one another, being unresponsive to their needs or being downright mean, certainly doesn’t grow our relationship to God!

The game of catch is a playtime model of mutual obedience.  In the game we are obedient to one another when we follow the “rule” of throwing the ball so that it can be caught.

Benedict’s Rule asks us to “each try to be the first to show respect to the other” and to “earnestly compete in obedience to one another” (RB 72.4, 6).  Here’s one place where Benedict encourages healthy competition!  In our game we show respect and model obedience when we are toss the ball to be caught.  We don’t blast each other with the ball as we might do in the not-so-good-old game of dodge-ball.  In the “Benedictine” game of catch we seek a harmony and unity.

Benedict says, “Let peace by your quest and aim.”  (Prologue 17) 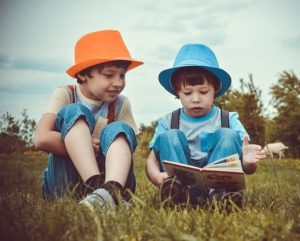 While not a game, here is am image of connection, mutuality and peace

Pursue What is Best For the Other Person

Benedict asks us to pursue not what we judge better for ourselves, but what we judge better for someone else.(RB 72.7)  So in the game of catch we support not only the good players but those whose skill is weak (RB 72.5).  We throw the ball a little more gently and carefully so that the person can grow in their skill.  Benedict asks us for the generosity of heart.  I throw the ball so that you can catch it.

The Love of Christ Comes First

Finally, the mutuality and care shown through a good game of catch turns away from competition and winning.  Instead we turn towards this counter-cultural directive: 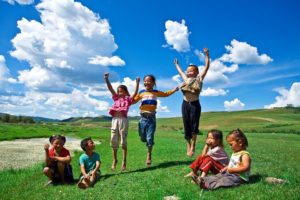 “Your way of acting should be different from the world’s way: the love of Christ must come before all else.”(RB 4.20-21)

Love is meeting its goal when everyone succeeds, grows and feels good about themselves.

All in all, I think Benedict would have approved of and perhaps even enjoyed a good game of catch!

You and I may not always be able to play catch, but we can all work on the Benedictine practices of mutual obedience, respect, doing the best for each other and loving one another.  We can practice at home and at the workplace, school, community and church.  Kindness can be the ball that we toss to another person.  You can be assured that the ball of kindness will be returned in love to you or be tossed in love to someone else.

Well, gotta run now.  I’m going to find a ball and play catch with someone!

Obedience is a blessing to be shown by all,
not only to the abbot or prioress
but to one another as sisters and brothers,
since we know that it is by this way of obedience
that we go to God. 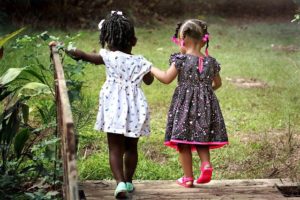 I found this charming video on line.  Although the two little boys are using baseball mitts and many won’t be using these, they way they encourage on another illustrates the spirit of love found in the Rule.  Take a look.  I think that you will enjoy this video and learn from it, too. 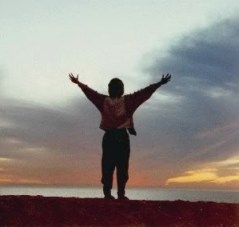 "See how the Lord in his love shows us the way of life."Prologue 20It is the liturgical season of Lent as I write this.  Is it for you as...

END_OF_DOCUMENT_TOKEN_TO_BE_REPLACED 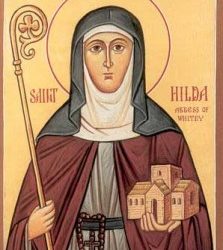 The Desire of Your Heart

What is the desire of your heart?  To lose 20 pounds, to find a better job, to get your son to pick up his room, to find help with...

END_OF_DOCUMENT_TOKEN_TO_BE_REPLACED 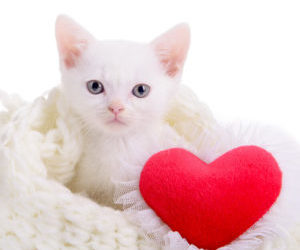 Living from the Spiritual Heart

“Let us open our eyes to the light that comes from God. Prologue  9a What is living from the spiritual heart?  What does this way of...