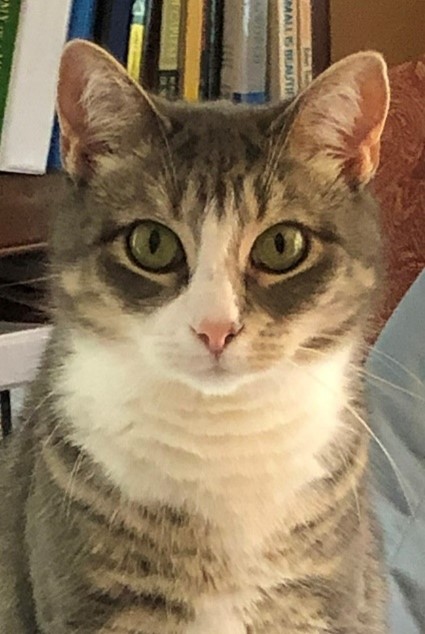 Welcome to The Feline Cloister

Hello!  My name is Sr Nikki.  I am the porter of the Feline Cloister.  If you have never heard of the “porter,” this is the person or feline who stays close to the front door so that visitors and guests like you will always find someone close by to answer your knock (Rule of Benedict, Chapter 66, Verse 2 – RB 66.2).

All of us in the Feline Cloister want to help you find more peace and joy in life.  If you hang around us, we will gently guide you in learning about and bringing into your life the practices found in the sixth century The Rule of St. Benedict.  We have found them very helpful here in the Feline Cloister.

Here is what you can do in this section:

Meet the members of the Feline Cloister

If you ARE a feline or know ANY feline who might be interested in joining the Cloister, check out the simple Application Form

Read how members of the Feline Cloister unpack The Rule of St. Benedict

Finally, take a minutes of two to read about august former Feline Cloister members who are now in the Feline Paradise Cloister

We hope you enjoy and gain insight in what we offer you here in the Feline Cloister.

Meet the Members of the Feline Cloister 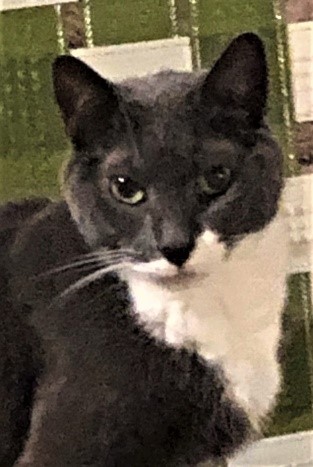 Hi.  I’m Br Ricky.  I’m happy to meet you and am glad that you are here.  I am the oldest member of the Feline Cloister, roughly 12 years old, give or take a year.  I came to the Cloister when I has a youthful kitten.  Worried that I might not make it through the approaching winter, Amma Jane set out a have-a-heart trap. Being pretty hungry, I wasted no time scurrying in.  Wow, was I surprised when I ended up in a placed called a veterinary clinic!  But Amma brought me home and I have loved being with the other cats in a nice warm house with regular meals.  I am a feral cat, but let Amma Jane and Prior John pet me while I am having my meals.

Learning about The Rule of St. Benedict has been an amazing experience for me, an experience that was furthest from my radar when I was roaming around Mountainside, searching for chipmunks.  I love The Rule and all the things St. Benedict says and offers, even in his chapters on discipline.

My role in the Feline Cloister?  I am the Novice Master, which means I instruct newcomers in what it means to become a Benedictine Feline.  I was most humbled when Amma selected me, but she explained that I had what St. Benedict said was needed in a Novice Master – “skill in winning souls.” Wanting to do my best, I always look after my charges “with careful attention.” RB 58.6   I also enjoy writing articles about living the Rule and sharing my observations about Amma Jane and Prior John, and the Cloister members, too.

What am I like?  Well, you should ask my Benedictine sisters about that, but I will say that I am a quiet cat, I like to snooze on the ottoman and even occasionally have fun with a cat toy.  I am also tolerant of the foibles of others for Benedict says that we must “support with the greatest patience one another’s weaknesses of body or behavior” (RB 72.5). 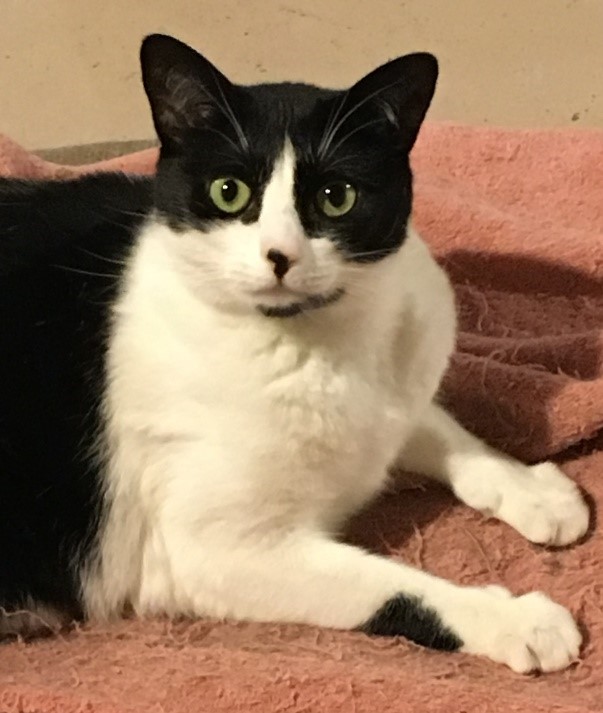 Hola!  That’s “Hello” in Spanish.  The only other Spanish I know is “¿Dónde está la comida para gatos?”  In English, “Where is the cat food?”  Unlike calm Br Ricky, my leading characteristic is anxiety about food.  You see, I had a tough life until I came to the Feline Cloister.

Like many in Benedict’s day I never had enough to eat.  I was with some humans, at first anyway.  But, due to what was stated as “bad behavior,” I was thrown out.  Then I REALLY didn’t get enough to eat.  I showed up outside the Cloister one day, acting real sweet and cute.  Prior John thought I would be a great Cloister member, until later when I decided to bite his leg, ignoring what I learned later from the Rule – “…No one has the authority to excommunicate or strike any of the members…” (RB 70.2)

What is my special role here?  In a lapse of “questionable judgment” Amma made me cellarer of the Cloister.  The cellarer is in charge of goods – food, tools, cat toys, beds, clothing (only for human monastics), and so forth – and is to distribute them to Cloister members as needed. (from RB 31 – Qualifications of the Monastery Cellarer)

The challenge I have is to try to think of these things as owned by all of us and not just by me.  I receive lots of sideways looks from the other Cloister members because I have a LONG way to go to act like Benedict’s vision of the cellarer – “someone who is wise, mature in conduct, temperate, not an excessive eater…”, etc., etc., etc. (RB 31.1)   But Amma has hope for me because my name in Spanish means ”hope.”

One important thing I have learned from St Benedict is this – “Place your hope in God alone.”  (RB 4.41)  When I get agitated or when I am fearful that the supply of cat food won’t materialize or when I am upset with Cloister members, I just turn to this phrase.  It really helps.  Try it!

Hi.  We met before if I introduced you to the Feline Cloister.  But if not, I give you a warm “Hello.”  I am the youngest member of the Cloister, being only five years old.

Amma saw me as a little kitten at an adoption day in a pet supply store.  When I saw her, I decided that she was the one I wanted to adopt me.  But after hovering over me for a time, she left the store.  I was crushed.

Amma would have gone home without me had the kitty litter bag not broken on the way to the car.  This meant two more passes by me, first, to get tape from the cashier to fix the bag, and second, to return the tape.  On that last pass Amma said, “I will take this darling, little kitten to the Feline Cloister.”  Hurray!

What keeps me busy?  As you may know I am the porter and welcome guests like you to the Cloister.  This really suits who I am because I am very friendly and enjoy pets and brushes.  But I also truly believe what Benedict says about visitors – “All guests who present themselves are to be welcomed as Christ, for he himself will say: I was a stranger and you welcomed me (RB 53.1 and Matthew 25:35).  I personally think we should welcome all humans and felines as Christ whether or not we know them. 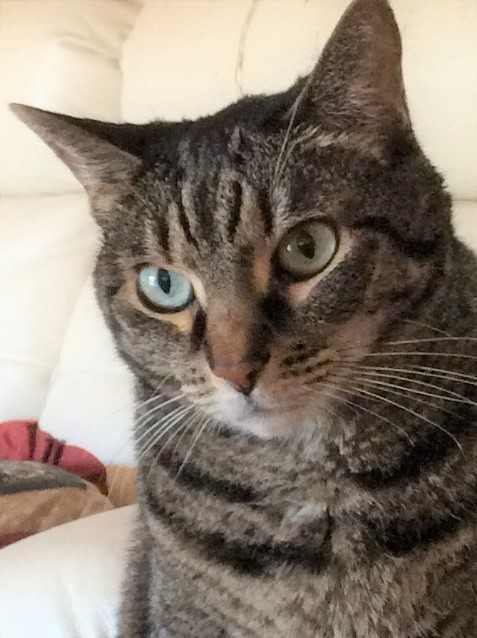 Peace to you.  I am Sr Maggie, the Cloister Contemplative, because I am always pondering things like who or what is God, how do we abandon ourselves to the Holy One, how do we keep Divine Love before our eyes and hearts, and how are we to be Christ’s paws in the world.

I am on a mission for the Mountainside Cloister and reside in Ft. Lauderdale, Florida, with Amma’s brother Jim.  I am there to help Jim straighten out his life and to teach him about the Rule.

My early life was turbulent and scary.  I was brought to a bookstore by one of Jim’s co-workers who heard me yowling outside a window of her home.   Jim didn’t want me, categorically stating that he already had both a cat and a dog.

Customers, a mother and daughter, did take me, but after a few months, unkindly tossed me through the door of the same bookstore, stating they didn’t want me any longer.  I was crushed and afraid.  All was not lost.  Jim was instructed by the co-worker to bring his carrier the next day.  I had a new home, and through Jim, became acquainted with Amma Jane and the Feline Cloister.

Truth is, even though a Benedictine feline and a contemplative, I can be rather bossy at times.  I am very vocal and can often be heard yowling at Jim.  We all have our growing edges, right?  Amma has assigned a special chapter of The Rule of St. Benedict for me to study – Chapter 6: Restraint of Speech.  In the feline translation edited by Fr Luke Thomas, RB 2021: The Rule of St. Benedict in Mew, Benedict says “that there are times when good words are to be left un-mewed out of esteem for silence” (6.2).  Now that is tough, but I am working on it!

Visit the Benedictine Glossary to learn about these positions in the monastery. The Feline Cloister models responsibilities after their monastic brothers and sisters.