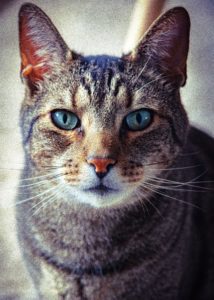 Sebastian William Furling came from a long line of Benedictine felines, aunts and uncles who chose the Benedictine way and entered religious life.  Raised in Minneapolis, Sebastian attended St. Angela the Feline parish church.  There he served as acolyte and later as verger, carrying a small thurible is his mouth.  His favorite place was the church library where he poured over books about the Desert Fathers and Mothers.

Sebastian loved hearing about the monastery from his uncle, Br. Bernard Furling, OSB-F.  However, the thought of living within one made Sebastian dig in his paws.  “How do they stop everything to go to chapel four times a day?” he mewed to himself.  “I love God, but isn’t that a bit over the top?”  Sebastian wanted to become a teacher instead.

But Uncle Bernard saw a special spark of God’s love in the young Sebastian.  Taking him under his fur, Bernard encouraged the studious feline to explore the religious life.

After spending several summers at a local monastery,  the young Sebastian knew his path to God.  He joyfully entered the feline branch of the monastery of Assumption Abbey in Richardton, North Dakota. 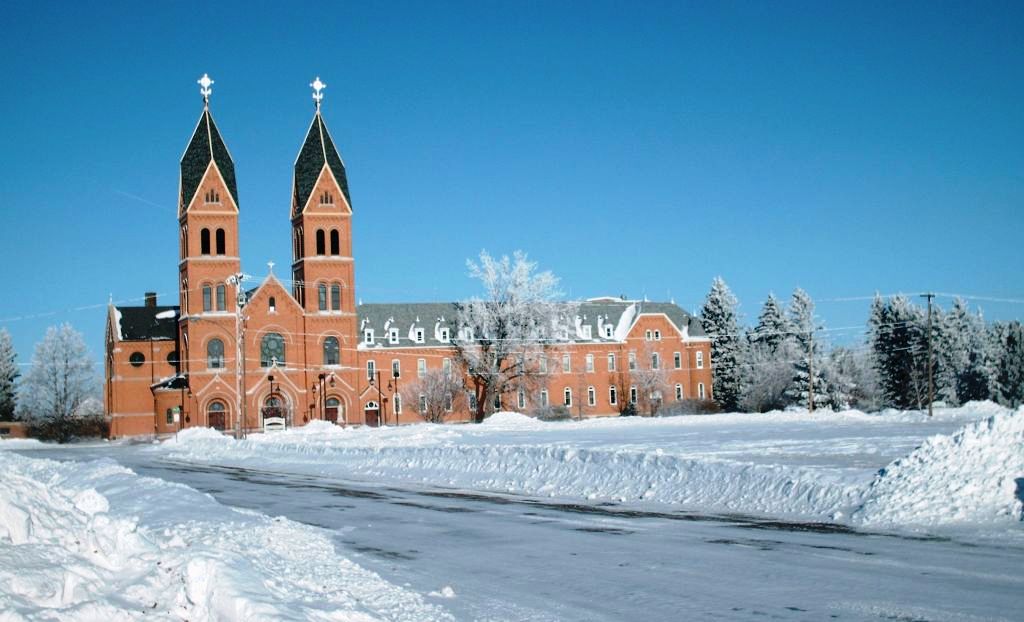 Sebastian attended St. John’s University-Feline in Collegeville, Minnesota.  Sebastian mewed in awe of the chapel at St. John’s Abbey.  “Every time I am here, I feel I am within the expanse of God’s immensity.  Yet the warmth of God’s Presence brings me to a purr.”

Sebastian took Terrence Sebastian as his monastic name in honor of the well-known and respected Benedictine scholar, Terrence Kardong, OSB. 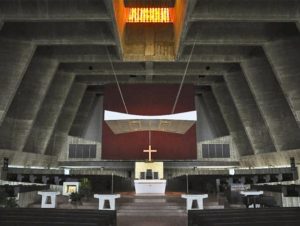 The Chapel of St John’s Abbey

Abbot Anselm, OSB-F recognized Br. Terrence’s studious nature, deep curiosity, and love for all things Benedictine, and arranged for him to study in Rome.  This launched his primary monastic vocation of scholarly research and writing on monasticism and The Rule of St. Benedict.

Wanting to emulate his mentor, Terrence Kardong, Br. Terrence Sebastian wrote Benedict’s Rule in Mew: A Translation and Commentary.  Br. Terrence did become a teacher, not only through his writing but also through lectures given worldwide.  He also has translated many articles written in French, German, and Italian Mew.

Br. Terrence never eschews manual labor.  He believes that every feline monastic should work with his or her paws, following Benedict’s instructions in the chapter on manual labor.

“When they live by the labor of their hands, as our ancestors and the apostles did, then they are really monastics.”  RB 48.8

Br Meinrad working with his paws to clear the ground for planting catnip which will be bagged and sold in the monastery gift shop. 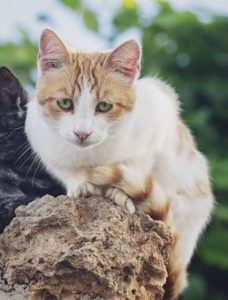 A Life of Dedication and Integrity

Br. Terrence’s love of and gratitude for the Rule permeates his writing about The Rule of St. Benedict.  “The Rule is a classic document that deserves close scrutiny and no part of it is unworthy of attention.  It is one of those books for all times that are worth poring over from beginning to end.” [1]

Br. Terrence continues to live at Assumption Abbey – Feline, writing, studying the Rule and its history.  “Uncle Bernard was right about me!” he mews.  Br. Terrence Sebastian Furling purrs in joy for God’s love and guidance throughout his life.  He offers  a Benedictine path for us to follow.

“…our ultimate concern is with God. As monks [or Christians], we really must keep our eyes on the ultimate meaning of our lives, namely God and his promises. Christian monastic life [and all Christian life] has no other basic meaning that this: we are living for God. We are called by God and God is our real future. All else is secondary.” [2]

[1] Here Br Terrence is quoting Terrence Kardong in his book Benedict’s Rule: A Translation and Commentary (Collegeville, Minnesota: The Liturgical Press, 1996), xviii.  The book is available on Amazon.com, but is expensive right now. 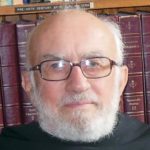